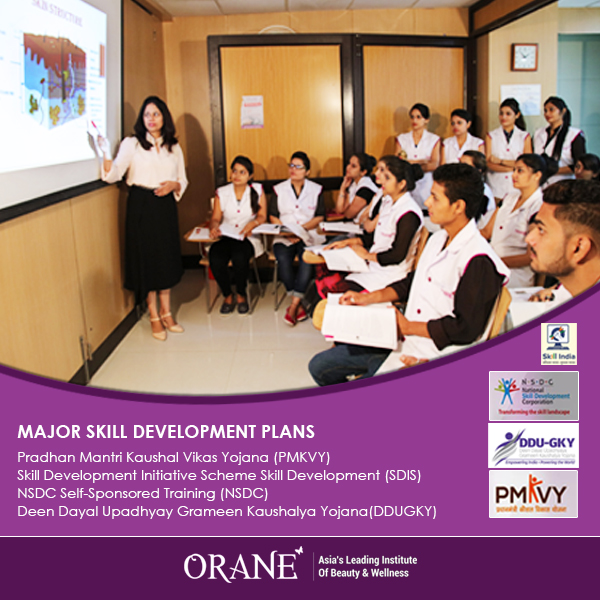 Becoming a part of skill development plans also help the individual to get government jobs. Moreover, the skill development plans and schemes help to bring out the talents of the country who’ve the better calibre and productivity, especially from the unrecognized or informal sectors where awareness could be very less. In India, around 83% of the workforces don’t know what to do for earning a living or recognition.

Moving ahead, our honourable Prime Minister “Shri Narendra Modi” has foreseen India as the Skill Capital of the World and it can be accomplished only when every Indian join their hand and contribute to the Skill India Mission.

Orane beauty institute has been working closely with Central and State Governments as well as agencies such as the National Skill Development Corporation (NSDC), State Skill Livelihood Missions (SSDMs), etc., to play its part in creating a new, skilled India. We train the people who are aspirants to start their career in beauty and wellness sector.

Beauty and wellness sector doesn’t look for professional academics degree. It just looks for the expertise. We at Orane assist an individual to recognize himself. To make it in reach of every person, Orane is involved with all flagship skill development plans under Skill Development Initiative (SDI) scheme.

The major skill development plans for which Orane is involved and contributed to make India as the Skill Capital of the World are defined under:

 Pradhan Mantri Kaushal Vikas Yojana (PMKVY): It is a unique initiative by the Government of India to provide the skill training and accreditations to every Indian youth so that they can have better career opportunities. Ministry of skill development & entrepreneurship offered this scheme with the main focus on the upbringing of youth and preparing them to face the challenges of the industrial world.

Under this scheme, a candidate also gets the financial support and letter of recognition in terms of certification on successful completion of skill training. It also helps them to get a government job for a better future.

 DEEN DAYAL UPADHYAY GRAMEEN KAUSHALYA YOJANA (DDUGKY): Ministry of Rural Development offers this special placement linked scheme for poor rural youth with an aim of poverty alleviation to get placed at least 75% of the youth. A candidate can apply both for private and government job under this scheme.

 SKILL DEVELOPMENT INITIATIVE SCHEME (SDIS): It aims to provide skill training to early school leavers such as school dropouts, ITI graduates and existing workers. Under this scheme, the certification is recognized nationally and internationally.

 NSDC SELF-SPONSORED TRAINING (NSDC): National Skill Development Corporations (NSDC) conduct short term skill development training courses at their 7000+ training centers. The sole purpose behind this scheme is to provide affordable and job oriented training that helps the youth in private and government jobs. Apart from above, Orane is involved with many other skill development plans. Some of them are being  planned out and some are on underway discussion. The names are: